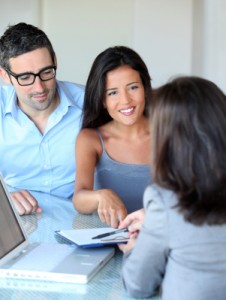 “Do what you do so well that they will want to see it again and bring their friends.”

To MAKE A REVIEW, please SCROLL DOWN to the bottom of the page OR go to your loan officer’s page by clicking their link our team page.

The entire experience was OUTSTANDING!! They were all very professional and were ready the moment we stepped in. We were totally blown away by how everyone was so nice and treated us like royalty.

I was already pre-approved for a mortgage with the very large banking institution that I had my last mortgage with for a house I had just sold. My brand new home builder prefers buyers use Landmark, so I decided to give them a try. It was important for me to be in my new home ASAP. And Landmark performed beyond expectations. I was in my new home in less than 3 weeks from signing the contract. Try to get a big corporation to give those type of results on a loan. And what they asked for initially was all that was needed. I bring this up because I've had mortgages before and they always have add on questions and requests for documentation (after the initial application). You wonder if they are qualifying you for a loan or trying to inspect your lower GI tract remotely. That was not the case with Landmark. Thank you Landmark. You made my purchase effortless.

by Arlene Rudd on

From the first email to get pre qualified, Sue was amazing! Then came her team, James and Alicia. James bent over backwards to make this experience easy. Buying a home is stressful but with Landmark helping you, it makes it easy to buy a home. Thank you all so much!!!

My experience with Landmark Mortgage Planners was awesome. They completed everything in the time frame that they gave me (Just 30 days during holiday time of Christmas) Every time I had a question they helped me right away. Thank You so much Sue Albritton and James Abrams!!!

by Mabel Baez on Marc Spiwak
Most pleasant experience of my life!

Working with LMP was one of the most pleasant experiences of my life. It's rare to say that when talking about mortgages, but its completely true. I originally heard about LMP through my advisor and his wife who had used them previously and only had positive things to say. Mr. Spiwak was attentive, explained the process of taking out a mortgage to me very clearly, answered all my questions and gave me sound advice on how to avoid pitfalls through out the process. I'm a 24 year old female and this was my first home purchase- While I certainly educated myself on the process his advice was very appreciated and necessary. His team deserve only the absolute best in the world specially Katey who is an absolute wonder and a rockstar. I may name my first born after her. She was incredibly knowledgable, personable, approachable, worked with me and gave it 200%. I can't thank her enough for her incredible hard work. She's the reason why I was able to close on my house ahead of schedule during the holidays! I'm a graduate student at the University of Florida and they were so accommodating to my crazy finals schedule- helping me get things done in a timely fashion despite my lack of time and sleep. CLOSING TOOK 22 DAYS! 22! Katey saved me from being homeless as my lease was ending a mere week later! She is amazing, I can't stress it enough. During the closing I met and worked with Christine who was a joy and helped me through a slight snag at closing (my fault!). Honestly, if you want a team that has your back, is willing to work with you and for you, a team that is a pleasure to interact with and will guide you through the stressful process that is buying a house LOOK NO FURTHER. Another point- their interest rates were competitive.

From the first email to get pre qualified, Sue was amazing! Then came her team, James and Alicia. James bent over backwards to make this experience easy. Buying a home is stressful but with Landmark helping you, it makes it easy to buy a home. Thank you all so much!!!

by Ryan O'Steen on

Sue and her team are OUTSTANDING! We are first time home buyers and Sue was very helpful in explaining everything. Sue and her team really look out for their costumers. Dawn is excellent as well she noticed our insurance quote was high so she quickly made a call and got us connected with other insurance for our home and we saved a lot of money!!! Sue also came up with a great way for us to save money....who doesn't love to save money?!?!? We would definitely recommend using Sue for your loan

See what our customers are saying…